New developments in the operation and application of Conair’s patented Wave Conveying™ material-handling system now give processors a wide range of options to achieve an unprecedented level of control over the vacuum conveying process. One of the newest enhancements is an ‘automatic flush’ valve that eliminates valve-sealing problems, reducing receiver fill times and effectively increasing system capacity.

With material lines running throughout Conair’s booth, the system will be a major feature of the company’s display at NPE 2018. Conair is exhibiting in Booths W1845 and S14045 at the show, which takes place May 7 – 11 at the Orange County Convention Center, Orlando FL. 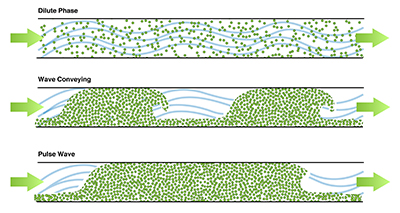 The patented system now makes it possible to move any resin, at virtually any speed, with higher throughputs over longer distances – without the material and equipment damage normally associated with conventional, dilute-phase vacuum conveying.

“We originally introduced this technology under the name R-PRO™, or resin-protection conveying system,” explains Chad Stover, Conair Marketing Communications Manager. “Our focus then was on slow-speed, dense-phase conveying in order to prevent problems like angel hair and pellet fracturing. Since then, however, we have refined the technology into what we now call the Conair Wave Conveying system. It is the first vacuum-powered material-handling system to give processors precise control of both material speed and flow, with the option to automatically move different materials at the ideal speed for each.”

Such precise control is possible through the interaction of Conair’s FLX-128 Plus conveying control, a Conair Wave Conveying valve and vacuum pump with a variable-frequency drive and standard receivers and tubing. Starting at speeds as low as 300 ft/min, the Wave Conveying system draws material through in the form of compact pulses or waves, each separated by an air space. As velocity increases, the interval between the pulses becomes shorter, and the waves flow faster. Pellets do not become suspended in conveying air as they do in conventional high-speed systems. Instead, they cluster into densely packed pulses or waves of material that roll gently and continuously through the conveying line. This not only explains why resin and equipment damage are virtually eliminated, but also why customer trials show that the system can deliver throughputs up to 2.4 times greater than typical dilute-phase systems. 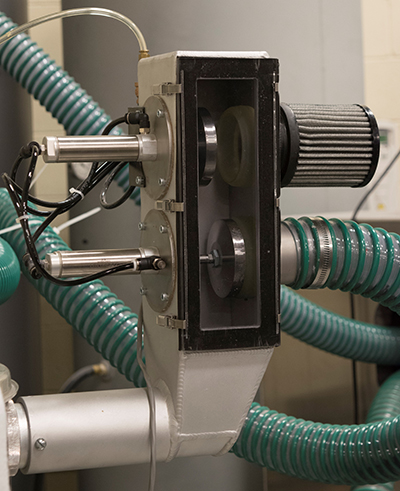 Conair’s latest Wave Conveying innovation, an advanced auto-flushing common line valve, maximizes system throughput by eliminating even the briefest valve-sealing problems that can occur with some material types. By ensuring the most rapid and positive valve seal on every fill cycle, the unique action of this valve significantly reduces receiver fill times and effectively increases Wave Conveying system capacity.

This new valve is the latest in a string of Wave Conveying innovations since the concept was introduced three years ago. Together, they give processors an unprecedented level of control over the vacuum conveying process:

Material-specific “recipes,” programmed into the FLX control, enable the system to automatically change conveying speeds and characteristics to suit the requirements of any material.

To give you the best possible experience, this site uses cookies and by continuing to use the site you agree that we can save them on your device.