The first available with variable-speed compressors, new 10-ton and 20-ton EP2 Series portable chillers from Conair combine dramatic power savings with the versatility to efficiently handle a range of low, partial, and full chilling loads. In head-to-head tests against 10- and 20-ton chillers equipped with conventional fixed-speed and digital scroll compressors, EP2 Series Portable Chillers deliver energy savings of 20 to 50% in a range of realistic and low-load conditions. This option is available on both water-cooled and air-cooled models.

“With the help of this variable-speed compressor option, processors can use the same 10-ton EP2 Series chiller to very efficiently handle any load from 3 to 10 tons. The 20-ton incorporates a 10-ton variable-speed compressor and a 10-ton fixed-speed compressor, so it can handle an even wider load range, from 3 to 20 tons,” says Tim Miller, Conair Heat Transfer Sales. “Processors will see impressive power savings from these chillers throughout their capacity range, with the most dramatic savings in the lowest load conditions. It’s like being able to roll out a different, properly sized chiller every time the cooling load changes.” 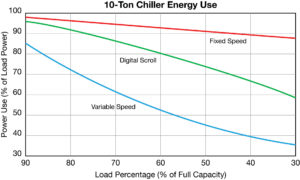 As noted, a 20-ton EP2 Series chiller combines a 10-ton variable-speed compressor with a 10-ton fixed speed compressor. Consequently, the energy savings compared to conventional single-speed chillers are not significant in the middle load range, where either compressor — fixed or variable — would be running at a full capacity of 10 tons. Otherwise, in the 3- to 8-ton range, and the 13- to 16-ton ranges, savings are still impressive, Tim Miller says.

EP2 Series chillers are built with premium components, including low-noise fans, stainless-steel brazed-plate evaporators, and sophisticated controls for unmatched performance and reliability. With cooling capacity provided with R-410A non-ozone depleting refrigerant, the EP2 series not only delivers exceptional power efficiency, but does so with the environment in mind.

The Conair Group (www.conairgroup.com) is a leading global supplier of auxiliary equipment for plastics processors, including resin drying systems, blenders, feeders and material-conveying systems, temperature-control equipment and granulators. Extrusion solutions include line-control systems, film and sheet scrap-reclaim systems and downstream equipment for pipe and profile extrusion. Over 450 individual products solve problems, save energy, cut waste and are easy to use. Conair is also an international company, with long-standing operations in Europe, Asia and Latin America. The industry’s most complete product line, top-flight engineering and unbeatable service, all combine to give processors the confidence they need to succeed in today’s competitive global marketplace.

To give you the best possible experience, this site uses cookies and by continuing to use the site you agree that we can save them on your device.